The top 10 camping areas in Croatia 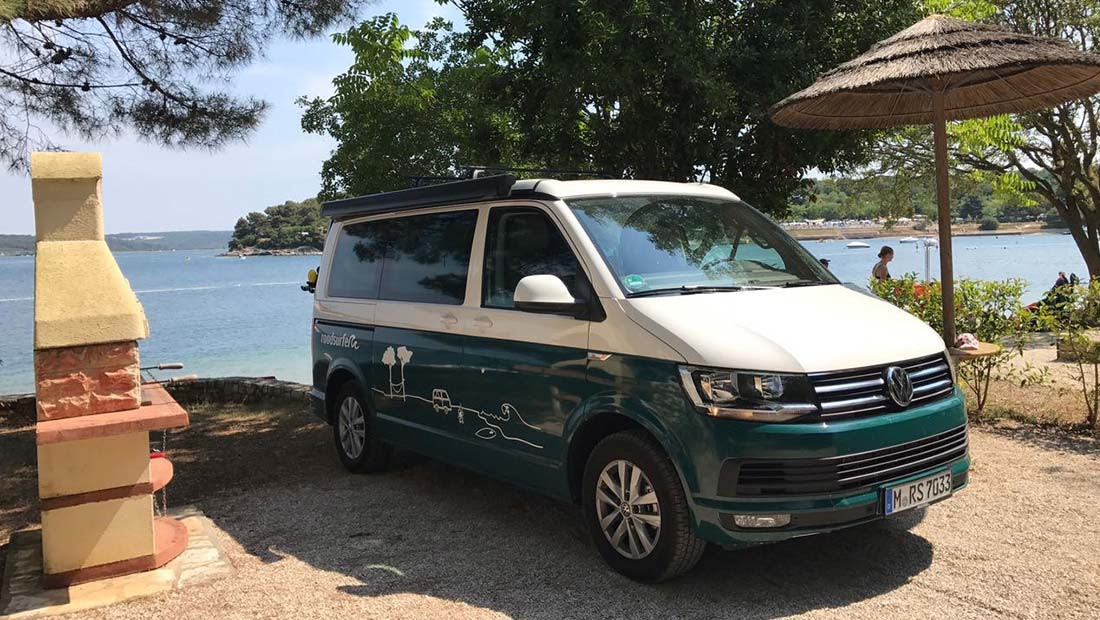 Camping in Croatia? Worthwhile! Hardly any other country in Europe offers so many possibilities to park your van directly by the sea and to wake up in the morning with the sound of waves in your ears. Travelling through Croatia with a camper means staying overnight in pine forests on beautiful campsites, diving into crystal clear water and enjoying Mediterranean flair.

Hire a Camper   Find a camping spot in Croatia

Your road trip will take you through Austria and Slovenia to the Croatian Adriatic coast, which is the No. 1 destination for campers in Southern Europe. Camping holidays in Croatia – definitely a must for real road surfers!

In this article you’ll find out the best route through Croatia, which way has the most to offer and which campsites are worth to stop at.

The path is the goal – Via Carinthia and Ljubliana to Istria

Coming from the German motorway A8 from Munich, you will drive through the Salzburger Land to beautiful Carinthia. After you have passed the Tauerntunnel (Attention: Additional fees besides the Austrian vignette!), a first longer stop – perhaps also an overnight stay – at the Ossiacher lake is worthwhile. Here are wonderful camping sites directly on the water, for example the Seecamping Berghof. Of course, the nearby much more famous Wörthersee also impresses with its turquoise water and good restaurants. But unfortunately there aren’t many campsites.

From Villach in Carinthia you continue through Slovenia to Ljubliana. Attention: In Slovenia you need a vignette, which is very expensive. And unfortunately, you pay for the Karawanken tunnel extra fees. At least, the motorway is good to drive!

You drive over the border with Koper (Do not forget: Croatia has no Euro but the currency Kuna). Nevertheless, one can often pay with Euro at least in Istria.

Along the Adriatic coast to the south

A roadtrip through Croatia is especially nice if you plan to drive along the coast. Of course, you can drive directly to the Adriatic coast after crossing the border (which is sometimes connected with waiting times as the single-lane road winds through the mountains and is very busy) and drive to destinations such as Umag, Porec, Rovinj, Pula or Rijeka.

But another possibility is to drive via Maribor to Zagreb and start your tour of Croatia there (followed by Istria and Dalmatia). But one thing has to be clear: Croatia’s capital with its numerous sights definitely belongs to the duty program.

You simply drive south along the coast, make a detour to Pag and finally land in Zadar from where an excursion to the island of Dugi otok is worthwhile. Afterwards you explore the south of the country with its numerous small towns, the Dubrovnic and the oldest national park of the country.

Your roundtrip through Croatia with the camping bus can be done in 10-14 days but it will be more relaxed with a few extra days. If you limit yourself to the north of the country, Istria, camping in Croatia is worth 7 days!

The Caribbean of Europe – History of the turquoise blue water

We start in Croatia’s capital Zagreb! The inner city is very lovingly prepared, it offers numerous sights and you can relax in various parks and gardens. In addition, the locals are cosmopolitan and especially loving with children. The price level, however, is not particularly low but rather average European.

Zagreb is divided into an upper and lower town connected by the Ban-Jelacic-Place. From here, a cable car leads to the upper town. You’ll end up here sooner or later no matter which way you go why you should enjoy the capital flair in one of the sweet street cafés at this place.

The Kaptol is one of two hills of Zagreb. Here you won’t find a lot but the most important sight of the city: The cathedral. The upper town (Gornji Grad) lies on the western hill as a counterpart to Kaptol. Until 1850 the independent settlement Gradec still existed.

roadsurfer tip: The colorful tulip seas in the botanical gardens of Zagreb are really impressive and romantic!

Which sights you should definitely see in Zagreb (Upper Town):

The lower town is called Donji Grad. It combines numerous representative buildings and green areas. A walk through the lower town can be comfortably done in 2.5 hours.

You should definitely see here:

roadsurfer tip: Zagreb is also a great destination in winter. The nearby mountain Slimje invites you for skiing and snow hiking.

The northwestern, densely populated peninsula of Croatia is called Istria. If you know and love Italy, you’ve come to the right place because here you can experience pure Mediterranean feeling or eat wonderful pasta and pizza. Nevertheless, we recommend the delicious Cevapcici as a national dish!

You can take a wonderful swim on Istria’s coast – Mostly a beach of gravel or rocks – in the north of Pula with a view of the Brijuni National Park. Kilometers of beach, bays for snorkeling and a beautiful view of the small islands make this place really magical.

Pula is the largest and most interesting city in the area. The ancient amphitheater built by Emperor Augustus in 30 B.C. is located in the center of the city and was the sixth largest gladiator arena in the Roman Empire. The sea can be seen from the grandstands. Sometimes concerts with great rock stars also take place here!

A day trip from Pula could take you to Cape Kamenjak, where you can kayak, jump cliffs or snorkel.

Whether you visit the islands of Krk or Cres is up to you and depends on your time budget (We recommend Cres because of the short ferry ride and fewer tourists!). Our next stop is a little inland, where the Plitvice Lakes await you. They are located in one of Croatia’s national parks and belong to the UNESCO world natural heritage. The park is the largest in Croatia and the oldest national park in Southeastern Europe. Here you can not only enjoy nature, but also climb, ride horses, explore caves and admire waterfalls.

In the footsteps of the Romans: Zadar

Zadar’s history has a long way back: It already starts – as often in ancient Yugoslavia – in Roman times in 186 B.C. Thus, you will find architectural sites and historical ruins of Roman ancestors at every corner. You should definitely visit the Place of Nations, the Cathedral and the Church of Sveti Donat with its mighty rotunda.

Especially extraordinary: You will find the sun salutation, in Croatian “Pozdrav suncu” by the architect Nikola Basic in the harbor. This is a huge circle consisting of 300 solar collectors. The evening light effects are a fascinating spectacle. So stay here until the sunset and enjoy the play of colors!

Another highlight is the sea organ. Sit down on one of the numerous steps and enjoy the view. Depending on the waves and the wind, you will hear very loud or very soft sounds. 35 plastic tubes have been dug into the seabed and as soon as the water flushes into, you will hear different sound sequences.

roadsurfer tip: Take the ferry from Zadar to the island of Dugi otok, which crosses three times a day. Here you will find beautiful beaches and bays with Caribbean flair, the cave Strašna peć, as well as its relatives Vlakno, Kozja pećina and Badanj. They may have served as a temporary habitat for early human populations on the island. This is not yet fully documented, but a flint stone and a small knife from the Stone Age were found.

Sibenik – the oldest Slavic town on the Adriatic Sea

Photographers get their money’s worth in Sibenik: The small narrow streets bear witness to the almost 1,000 year old history of the city. Enjoy a relaxing walk at the harbor promenade and take a glimpse to the city, where the Jakobs-Dom and the oldest fortress, the Sveta Ana, will catch your eye.

roadsurfer tip: Right next to the car-free zone is a parking lot offering a really lucrative park for your camper for only one Euro per hour. Unfortunately, it is usually very crowded.

Pearl of the Adriatic: Dubrovnik

If you want to go all the way to the south of Croatia, you should be aware that you are driving a very short distance of 20 minutes through Bosnia-Herzegovina. With roadsurfers, however, the insurance applies everywhere.

Once you have arrived, you will understand why the city is also called “The Pearl of the Adriatic”. The history of the pearl goes back to antiquity, from which the splendid medieval old town tells of.

You should definitely see the following sights in Dubrovnik:

The top 10 camping areas in Croatia

→Campsites in and around Istria

In this area, you will find mountains, caves, forests, and last but not least, beaches! There is plenty to do and experience.

→Campsites in and around Primorje-Gorski Kotar

→Campsites in and around Zagreb

Here you will experience the ultimate peace and relaxation; wellness, nature, monuments, and greenery.

→Campsites in and around Krapina-Zagorje

→Campsites in and around Karlovac

Located in central Croatia, Sisak-Moslavina will amaze you with its rich Slavonian history and heritage.

→Campsites in and around Sisak-Moslavina

Waterfalls, mountains, nature, and beaches, too! What are you waiting for?

→Campsites in and around Lika-Senj

We are sure that you have heard of Split before; experience one of Croatia’s top destinations in style!

→Campsites in and around Split

Makarska is the ultimate beach lover destination. The Makarska region has around 96 beaches and is arguably one of Croatia’s favourite tourist destinations.

→Campsites in and around Makarska

Dubrovnik has such a thrilling and preserved medieval history. Additionally, it is a city with tourism, beaches, architecture, and unique landscapes.

→Campsites in and around Dubrovnik

Find a camping spot near the beach

Are you longing for some camping directly at the beach? Check out our spots near the beach in Croatia. 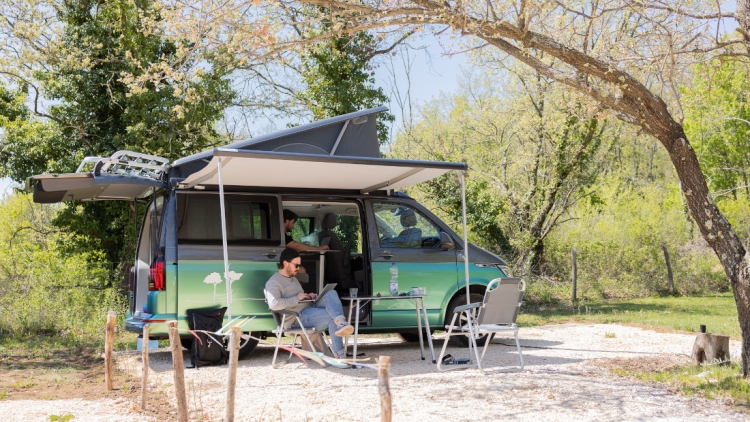 Find a camping spot in the middle of nature

Are you looking to escape from the crowds and all the noise? Check out our spots in the middle of nature. 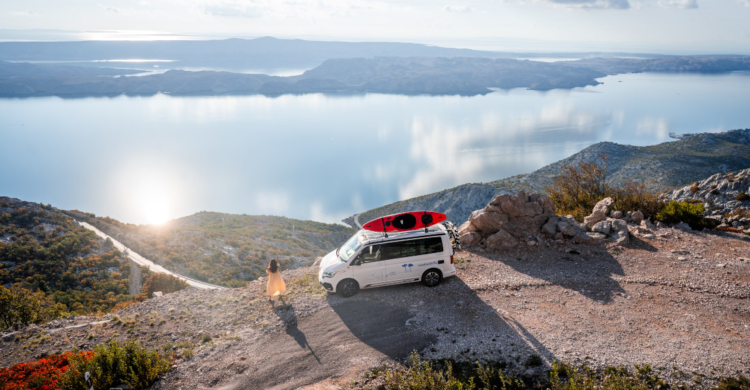 Find a camping spot near the mountains

Find your dream camping spot near the mountains.

Don’t Miss the Best Deals of the Year!

Sign up now and receive our limited-time offers on your campervan hire!

For information on how roadsaurfer handles your data, please view our privacy policy. You can unsubscribe at any time.