Island feeling and camping doesn’t fit? No way! Camping on Sardinia is the perfect destination for your roadtrip and offers everything a camper heart desires. Thus: Get into the roadsurfer camper and off you go. 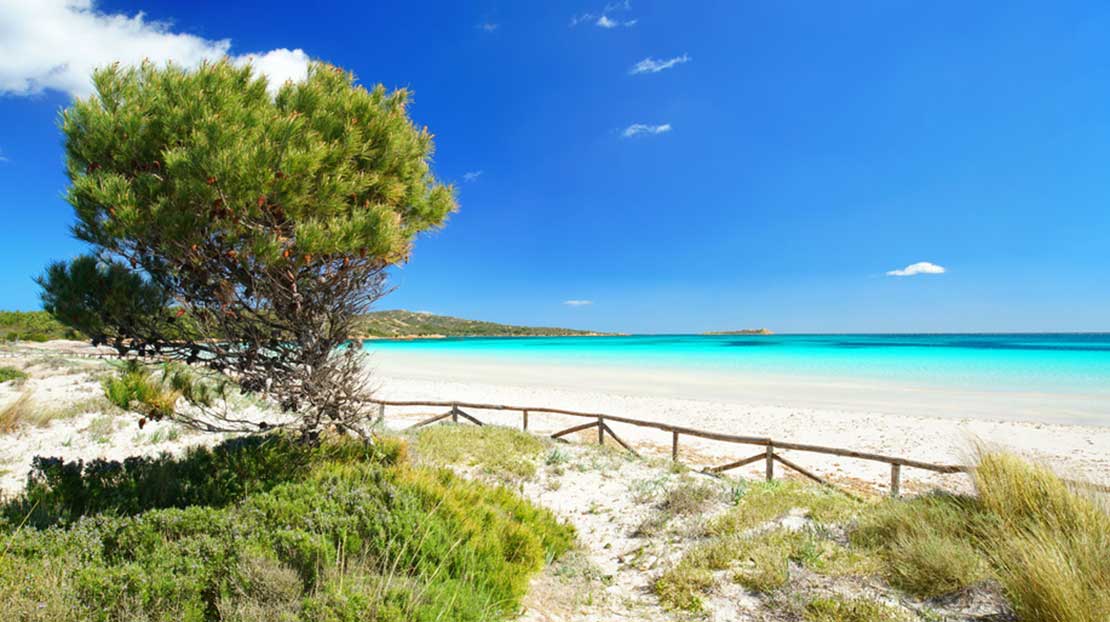 Off to the island – Camping in Sardinia

You don’t need to fly away if you want to enjoy the Mediterranean sun on an island. With a roadsurfer Bulli you get to know the Mediterranean region from a completely different perspective – without boarding stress and hotel search. You always have your own mobile four walls with you and are very flexible. So how about camping in Sardinia – one of the most varied Mediterranean islands in Italy? We have the most beautiful places and destinations for you and your campervan.

Camping in Sardinia – How to get to the island

The best way to get to Sardinia is to use the ports of departure in Genoa in Northern Italy or in Livorno in Tuscany. Genoa is the fastest destination for camping enthusiasts from southwest Germany or Switzerland. For travelers from Austria, Bavaria or South Tyrol Livorno offers the faster alternative.

There are several possibilities to start your journey on Sardinia. The three most important ferry ports on the island are:

For overnight cruises, you have the choice between rental cabins or some shipping companies also offer an overnight stay in your own campervan – You have to decide for yourself: A night on deck in your own bus with a starry sky or the feeling of a ship traveler below the deck.

IMPORTANT: Please refer the length details of your roadsurfer on our website for your ferry booking. You do not have to enter a license plate number when registering online. The reference “rental car” is sufficient.

Camping in Sardinia: Parking, getting off and feeling good

Wild camping is strictly forbidden in Sardinia – and this also applies to motorhomes and camping vans. Not only in the high season the coast guard patrols the beaches and the forestry office the interior to track down rule breakers. Wild campers have to reckon high penalties. Well, you should better go to a cute campsite in Sardinia.

The most important facts for your camping holiday in Sardinia

Most of Sardinia’s campsites are located close to the coast, so sea views are almost guaranteed. The adjacent beaches are fantastic and the rocky inland is also quickly reached by camper. The campsites are usually open between May and October – For the high season in August, however, it is important to be quick and book early.

The equipment as well as the prices of Sardinian campsites are very different. On the exclusive Costa Smeralda, a pitch costs 35 Euro per night plus an overnight fee of 15 Euro per person on average. The essentials like a small supermarket can be found on every pitch. Usually, the pitches are laid out in Mediterranean pine groves or eucalyptus groves – Nobody really has to roast in the sun when camping in Sardinia.

Sardinia has many of the most beautiful campsites in Europe – You’re stupid if you don’t try them. We have three tips for different types of camping.

The sweet campsite in the north of Sardinia is very recommendable for the small money. It is idyllically situated at the lagoon-like mouth of the Coghinas River. There are water sports possibilities both on the river and on the sea. There is also a swimming pool, a bar, a surf school, a mountain bike station and a kayak rental. The place and the beach invite you to relax - because it is almost never overcrowded here.

If you would like to park your VW bus right by the sea and are always looking for the perfect wave, this is the right place for you. With a fantastic view from a huge granite rock you park your camper directly at the sea, only a few kilometers away from Palau and jump into the tides - Opposite: the island Maddalena. From windsurfing, kayaking or scuba diving to sailing and mountain biking, this place will make sports heart beat faster.

For families with small children this place at the east coast of Sardinia is a dream. It lies directly on two flat beaches and offers a lot of variety for the little ones. In the middle of a natural area, the kids can let off steam on the nice playground, while you enjoy your pizza in the adjacent restaurant. This is a place where nature and its biodiversity are at the forefront - a true paradise.

Experience Sardinia with the camper – The highlights of the island

Sardinia is the second largest island in the Mediterranean after Sicily. With almost 2,000 kilometers of coastline, it is ideal for water sports of all kinds. The interior, on the other hand, is rocky and rugged – Here you can hike and discover hidden places. You’ll find thousands of nuraghs all over the island – mysterious beehive-shaped stone ruins from the Bronze Age. One of the largest and oldest nuraghi is Su Nuraxi in Barumini. It dates back to around 1500 B.C. So it’s well worth exploring the area on a historical tour.

Would you like to enjoy your camping holiday in Sardinia to the fullest? Then you shouldn’t miss out on these activities. We have compiled the hotspots of Sardinia:

Camping in Sardinia: The beaches

The top activity in Sardinia is quite clear: bathing. With the numerous beaches and bays – whether lonely, exotic, unspoilt or lively – you can quickly lose track of things. Here a bath day is particularly worthwhile.

… amidst granite rocks, can be found at Costa Smeralda. Snug and tiny sandy lime beaches, on the other hand, are at the Gulf of Orosei on the east coast – They are often only accessible by boat or for hikers. Rock and pebble beaches can be found on the Costa Paradiso, Bosa, Alghero, Carloforte, Sant Antioco and Marina di Gairo.

And, of course, there is also plenty to discover under the surface: sunken Roman galleys, rare shellfish species, jagged rocks and colonies of sea bream. In order to protect the flora and fauna of Sardinia, they have set up monitored marine parks. So let’s go, diving and snorkeling is a lot of fun here:

Sardinia is a paradise for sailors – whether as a guest on board or even on the dew. In the Tyrrhenian Sea and the open Mar di Sardegna in the west, you can hoist your sails almost all year round. A trip through the rugged islands of the La Maddalena archipelago in north-eastern Sardinia is particularly exciting.

For experienced sailors there is the route between Corsica and Sardinia – here you need some nautical know-how – unpredictable gusts have already made some hobby sailors sweat here.

After the trip you can moor in many harbors that are located directly in the villages, for example:

Sardinia also has absolute hotspots for real sports cannons – Whether windsurfing, kitesurfing, stand up paddling or surfing, here you can really let off steam and that until winter. Because the wind basically sweeps around the whole island, you can also surf around the Mediterranean island. For beginners, there are also appropriate schools on Sardinia. The Chia Wind Club in Chia and the kite generation in Cagliari are highly recommendable.

Camping in Sardinia: Hiking and climbing

For those who prefer to have a good time on land, Sardinia offers just as many possibilities as water sports. The rugged stone blocks, steep rock walls and rugged coasts invite you to climb. Whether easy limestone routes or challenging professional walls – Sardinia is a real free climber paradise. Many of the routes are also located directly by the sea. Could there be anything more beautiful? Spring is the best time to go, as the temperatures are not yet so scorching and there is no danger of being swept off the wall by a storm. But in any case: Safety first!

The most popular climbing areas are:

Sardinia has also one of the most difficult alpine long-distance hiking trails: The Selvaggio Blu. But as it doesn’t always have to be extreme sport, Sardinia is also ideal for easy hiking. Thus, those who like it a little quieter should have a closer look at these hiking areas and nature parks – and this is also worthwhile if, exceptionally, the sun does not shine.

Special highlights are the gorge Su Gorropu and the prehistoric cave village Tiscali in Supramonte. The latter, however, requires some climbing. Less mountainous are the Giare, e.g. Giara die Gesturi, – And the plateaus are also a real paradise for animal lovers.

As you can see, camping in Sardinia has something to offer for every taste and for every travel formation – whether sports enthusiast or family man. With water temperatures from 19 degrees in May to 25 degrees in high summer and 300 sunny days a year, the island is also a great destination for campers almost all year round. That means: Saddle your van and off to fun.

We wish you a lot of fun at your camping holiday on Sardinia!

The roadsurfer spots app is here!